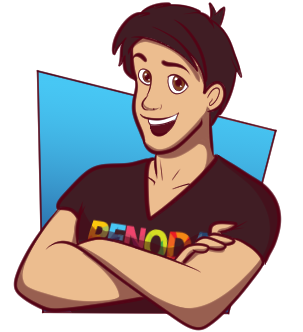 Q – What does Penoda mean?

A – Penoda is a combination of Panda and Nova. I created the title to act as a completely neutral title to work under, any opinions are therefore based on my work

Q – What do you look like in real life?

A – Well pretty much like a fleshy version of that guy↑

Q – How come you’ve stopped drawing as much?

A – My work takes up most of my time these dayz. If not not at work, I’m studying for more qualifications in a never ending list of related courses they put me on. It brings in the money though and I love what I do. So with less free time to spend drawing, I focus on my own projects at my own speed ^^

Q – Where did you learn to draw?

A – I was never taught… Although I think that, as with any skill, learning is about spending time doing it.

A – Not really, I always thought the idea was to make things bigger. But each to their own.

A – Not role-play as such, but every now and then I’ll do Q&A sheets where you can ask questions and I draw my characters answering them in person. Check my journals to see if I’m doing a Q&A sesh, or look at past sheets to see if your question has already been answered.

Q – How did you come up with Josie and Fluff?

A – Josie and Fluff came about when I was first setting out into the arena of digital inflation arting. I guess when I was brainstorming for a character I drew on my influences of what I thought looked good on a woman, and Josie was born. That first ever rendition was the first digital piece I posted on DA titled Meet Josie. Fluff actually came about as a bit of an accident. When I was creating the Meet Josie image, I drew little pictures of the things she liked, and one of them was fluffy things. As an example of something fluffy I drew a crude version of a little pink rabbit flying with balloons. In my head (as I recall) I wanted Josie to be all things sweet and innocent rather than all things dirty and tawdry. So when it came to coming up with ideas for a second image with Josie I thought why not have the sweet innocent bunny be the naughty one… and so fluff was born. Lexi came much later after I rebranded the Josie & Fluff comic series but before I had written the comic story. I needed a character to play the ‘Straight man’ as it were (a term to mean a comparative to play off of). But I took time and care to develop all three of my main characters and I’m sure there will be more to come in the series as the story progresses.

Q – What are your influences?

A – Well I like to think I bring something unique to the inflation community. Not Better, just different. I suppose my own machinations are my biggest influence, but to list all the things that fuel them would be ludicrous. But as an art style I would say my biggest influence is the art styling of Disney back in the good ol’ dayz of 2d animation. Being raised with disney princesses, it kinda stuck with me. Cross Disney with the styles of DA’s very own Jolly Jack, SkieMaree and RoninDude, and you pretty much have my style locked down. However even in the short time I’ve been drawing stuff here, my style continues to evolve and grow as I discover better ways of doing things.

This website uses cookies to improve your experience while you navigate through the website. Out of these cookies, the cookies that are categorized as necessary are stored on your browser as they are essential for the working of basic functionalities of the website. We also use third-party cookies that help us analyze and understand how you use this website. These cookies will be stored in your browser only with your consent. You also have the option to opt-out of these cookies. But opting out of some of these cookies may have an effect on your browsing experience.
Necessary Always Enabled
Necessary cookies are absolutely essential for the website to function properly. This category only includes cookies that ensures basic functionalities and security features of the website. These cookies do not store any personal information.
Non-necessary
Any cookies that may not be particularly necessary for the website to function and is used specifically to collect user personal data via analytics, ads, other embedded contents are termed as non-necessary cookies. It is mandatory to procure user consent prior to running these cookies on your website.
SAVE & ACCEPT
Are you 18 or older? This website requires you to be 18 years of age or older. Please verify your age to view the content, or click "Exit" to leave.